The terminator, a very peculiar region of the atmosphere that the solar occultations probe, is the limit between the day and night sides of the planet. It therefore delimits two regions in which the solar illumination and the photochemistry are quite different. Most of the solar occultation retrieval algorithms implemented nowadays rely on a series of assumptions, the most important one being that the atmosphere is spherically symmetric, i.e. that identical temperature, concentration and density conditions are found at a given altitude independent of the latitude or longitude. However, it is known that densities are lower and temperatures are higher on the dayside than on the night side, particularly at the high altitudes where solar occultations sound the atmosphere. This combined with the fact that the footprint of an occultation on the surface of the planet is usually varies by 100 to 400 km casts doubts on the validity of the hypothesis related to the symmetry of the atmosphere along the line of sight. 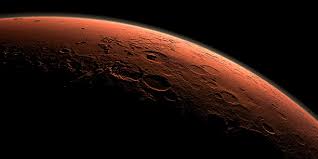 Within UPWARDS a novel approach will be used to suppress these limiting assumptions: the precise modelling of trace species distributions at the terminator will be intimately coupled with the improved retrieval schemes. This will be applied on the most complete solar-occultation dataset available to date on Mars, i.e. from SPICAM on board Mars Express.

General circulation models (GCM) describe how the atmospheric structure and dynamics evolve depending on characteristics such as the latitude, local solar time, altitude, solar irradiance and so forth. GCMs are a crucial tool in the interpretation of measurements, filling in the observational gaps of time and space. Detailed model (3D and 1D) studies of Mars atmospheric chemistry in twilight conditions will help understand the diurnal cycles for a series of species. In particular ozone (O3) shows a complex photochemistry driven by the solar illumination. 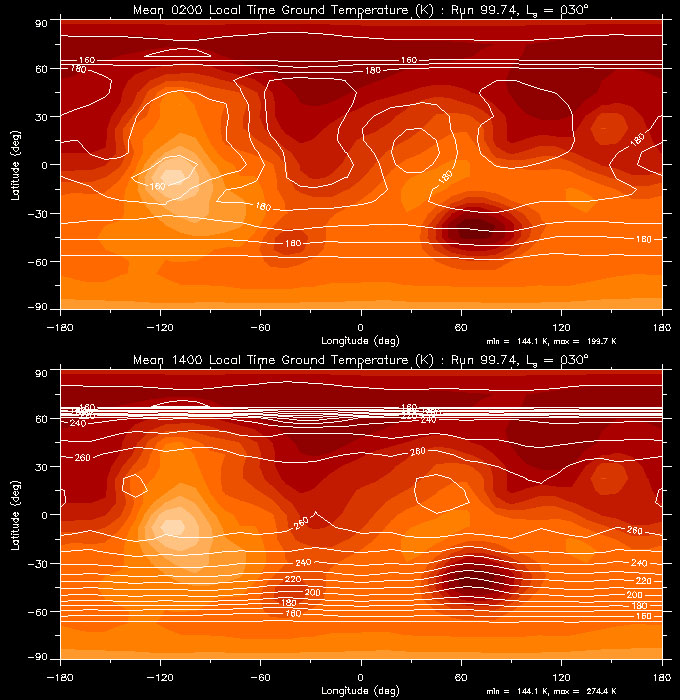 Temperatures vary with the seasons and with time of the day. Here are 2 Global Circulation models using MOLA data that show the temperature (for a season at Ls=30 deg.) at 2:00 AM (upper), and 2:00 PM (lower).
Credit: NASA Ames/GCM Team

The goal of UPWARDS is to extend the Consortium radiative transfer tools to handle concentration gradients along the line of sight in solar occultation observations. At least two of the radiative transfer codes available to the UPWARDS consortium will be used, the ASIMUT (or ASIMAT optimized version for solar occultation) developed and maintained at IASB and the NEMESIS code, developed at Oxford University. The challenge is posed by the rapid timescales of photochemistry at sunrise and sunset, producing acute variations in the trace gas concentrations at the terminator. With the improved knowledge of the processes taking place at the terminator through the use of GCM, it becomes now feasible to supply the retrieval codes with best guesses of the gradients existing across the terminator and the non-homogeneities of composition along the line of sight. This requires a very close interaction between retrieval codes and GCMs, at an unprecedented level.

The SPICAM UV spectra obtained during solar occultation observations will be used as a test case to investigate and analyse the improvements resulting from the implementation in the retrieval algorithms. The investigation will be performed on existing SPICAM solar occultation observations, but having in mind the preparation of the analysis of the data expected from the NOMAD instrument on the ExoMars 2016 Trace Gas Orbiter. The focus will be set on detection of the ozone which is a species of high importance because of its strong correlation with the amount of oxidants in the Martian atmosphere. 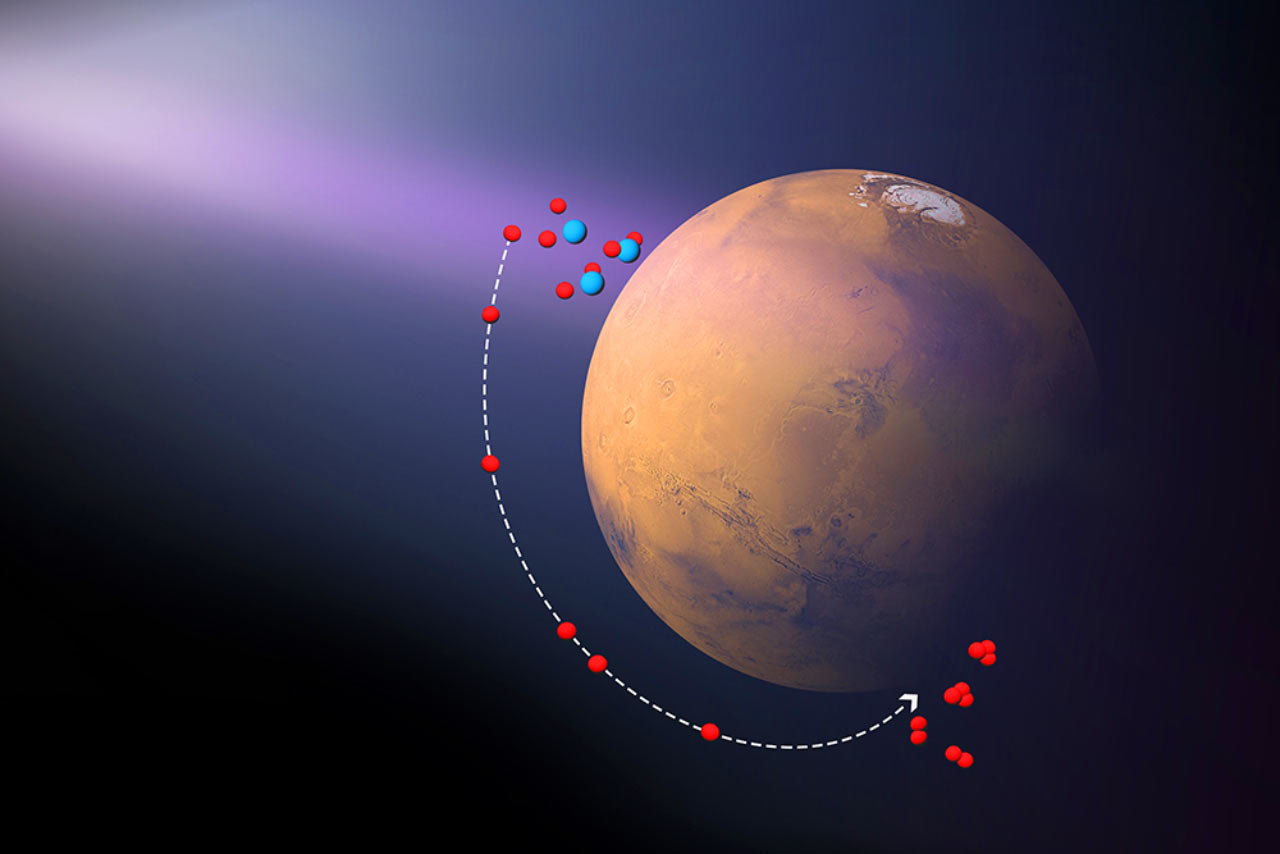 Ozone production over the southern winter pole on Mars. Oxygen atoms produced by the ultraviolet photolysis of CO2, shown in blue – carbon, and red – oxygen, in the upper branch of the Hadley cell eventually recombine in the polar night to form molecular oxygen and ozone. The concentration of ozone gas at night is dependent upon the supply of oxygen and the rate of destruction due to hydrogen radicals. Image credit: ESA / ATG medialab.