May 24, 2018
Cross-border and cross-disciplinary cooperation have enabled EU-funded researchers to build up one of the most comprehensive pictures of Mars to date, preparing future missions with new analytical tools and underlining the benefits of integral approaches to planetary exploration.

The UPWARDS project, which was was completed in February 2018, successfully analysed data from missions like the Mars Express to achieve new insights into the content of the planet’s subsoil and dust storms as well as the behaviour of water ice clouds and the exchange of methane between the interior of the planet and the atmosphere. New methods were developed to exploit data from the 2016 ExoMars Trace Gas Orbiter (TGO) mission, and to provide a frame of reference for future missions such as the ExoMars Rover operation.

Project coordinator Dr Miguel Angel López-Valverde from the Institute of Astrophysics of Andalusia in Spain believes that the results clearly demonstrate the vital role of scientific cooperation in understanding complex systems like a planet’s climate and give scientists a truly coupled view. “Over the past 20 years or so of Mars exploration we’ve found the climate to be far more complex than first thought,” he says. “The climate should be seen as an integral system, much like the Earth’s, where the surface, volcanoes, oceans, atmosphere and clouds etc. all interact.”

The key objective from the start was to develop new mathematical retrieval methods for obtaining more data about Mars. “Some of these techniques can combin e data from different instruments, which can be a lot more efficient” says López-Valverde. “This sort of thing has been done for collecting data from Earth survey satellites but this is the first time such techniques have been applieBringing together experts from across a range of fields, as UPWARDS has done, has been instrumental in this. “One of the strengths of this project has been to enable teams to work together from the beginning,” says Dr López-Valverde. “Usually how it works is researchers receive funding for their own specific area, and only collaborate with other experts later on. We have shown that putting in place collaborative teams, before new mission data arrives, can be hugely beneficial for mission preparation, and I think this is a clear lesson for the future for Mars.” 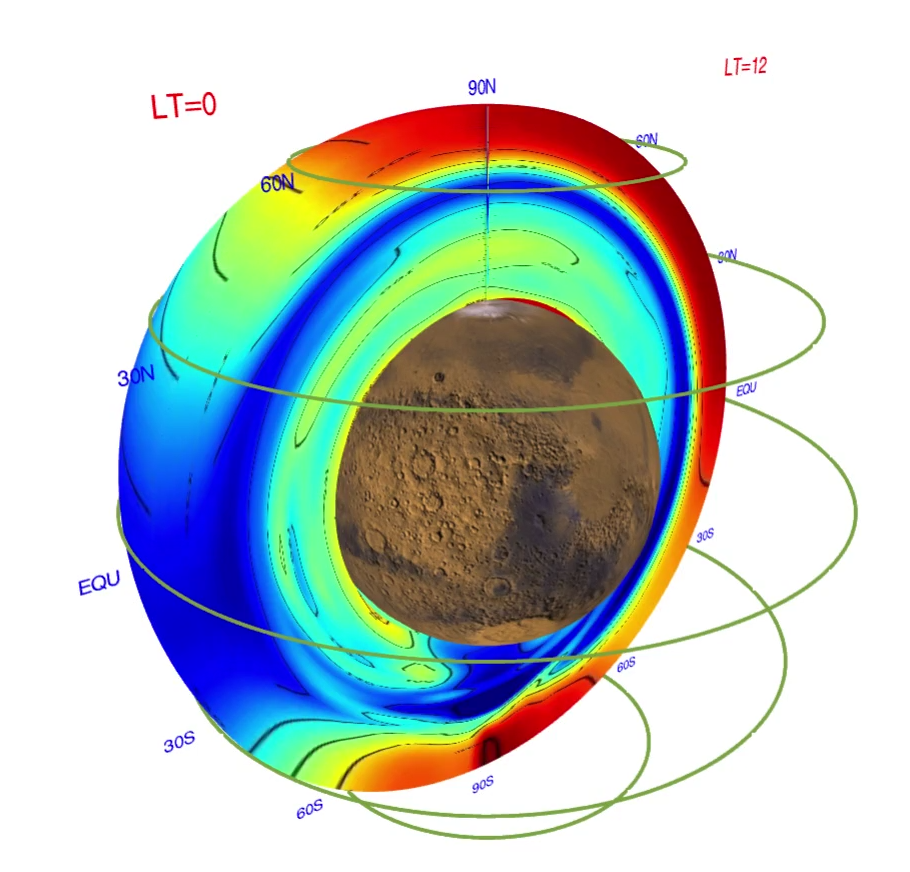 Fig 1. This plot is part of one kind of movies produced in UPWARDS to track the atmospheric variability, how temperature varies with latitude, longitude & altitude.The hemisphere closest to the observer is the nightside, and the season is winter in the North. The dayside is much warmer than the nightside, although this simple dichotomy can be disrupted by an intense summer-to-winter circulation: the Northern hemisphere looks warmer than the Southern one... if our model is correct!
ExoMars should confirm model predictions like this one.

New methods for retrieving data in special observing geometries, looking at the limb of the planet for example, have been pioneered. Vertical profiles of water vapour and carbon dioxide can be recorded even in dusty atmospheric conditions or in direct solar illumination, something that only five years ago would have been impossible to obtain. The project also managed to peek inside dust storms. “This was especially challenging", says Lopez López-Valverde. “We quantified an inverse correlation  between the amount of dust and the amount of water vapour inside a storm; again, this sort of finding is a first for Mars.

Another exciting development has been a complete map of Martian water ice clouds, which suggests they play an important part in the planet’s water cycle. “These are amazing, bizarre objects that until now we knew very little about,” says López-Valverde. “We now  suspect there is an active exchange of water vapour between the subsurface and the atmosphere, and that water ice clouds are much more abundant than previously thought. All this data was available from the Mars Express mission; we just developed the methods to extract it.” The project has even been able to measure and compare puzzling emissions of hydrogen at the top of the atmosphere, escaping to space, perhaps confirming that large amounts of water vapour can reach high altitudes during dust storms.

Following completion of the project in February 2018, López-Valverde is confident that dissemination of the data and tools will help to put Europe at the forefront of Mars research and encourage stronger links between European teams. “Large collaborative consortia are key for future planetary research,” he underlines. “This project has set an example which I hope others will follow.”