The Open University (OU) is the UK’s largest University with over 250,000 students and is the only university dedicated to distance learning. In addition to the main campus at Walton Hall, Milton Keynes, the OU has 13 regional centres in the UK and employs 4,700 academic, support and administrative staff as well as over 7000 tutors.

The OU is one of the UK’s largest planetary science research communities. Research is organised through the internationally renowned Planetary and Space Sciences discipline within the Department of Physical Sciences, and more recently by the establishment of the Centre of Earth, Planetary, Space and Astronomy Research (CEPSAR) a multidisciplinary research centre with more than 50 academic staff and 150 students, research fellows and technical staff from Earth Sciences, Astronomy and Physics as well as Planetary and Space Science. The OU has been a core member of several of Europe’s most successful planetary missions including Rosetta (PI of Ptolemy), Cassini-Huygens (PI for the SSP instrument suite), Mars Express and Beagle 2 as well as future missions such as ExoMars TGO (NOMAD) and ExoMars 2018 (PanCam). The OU is a partner of choice in several NASA missions including Stardust and Genesis the first sample collections of commentary and interstellar material.

The OU’s research is supported by world class facilities and is one of the UK’s (and Europe’s) leading centres of mass spectrometric and isotopic analysis. The OU also has a suite of planetary simulation facilities capable of producing large scale mimics of Martian and Titan planetology and a large-scale computer cluster for numerical simulations. 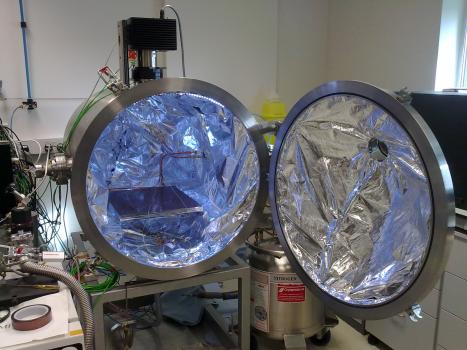 Infrastructure: The OU offers an integrated large-scale computing cluster122, with around 300 cores to support the high performance computing requirements of the wide portfolio of various ongoing numerical research projects at the OU. The Integration of Maths, Physics, Astronomy Computing & Technology (IMPACT) cluster, formerly the Neptune cluster, started life in 2001 in the Physics & Astronomy Department (Science Faculty) as a replacement for the aging Alpha based research computer system, with 11 dual processor computers. This quickly grew when the Technology Faculty added a further 10 machines. Following the building of a test cluster using desktop boxes, a larger cluster was then built with 22 blade units. Growth of the numerical research projects at the OU called for more nodes and a lot more storage, expanding the remit of the IMPACT cluster to its present size of over 300 cores.

A new building to replace the old facility was allocated to support OU computing activities, with a purpose-built server room. IMPACT now serves two university faculties and from October of 2008 its new home is the Jenny Lee building, JLB2.

Communication and Outreach: The OU also has a very strong heritage in exploitation of science research for public engagement, with experience indicating that the media have a great interest in the outcomes of the UPWARDS proposal. The OU participants have a large amount of experience in dealing with the media, including academic consultancy for co- produced TV documentaries and interviews for live current affairs programmes. The OU heritage of exploitation and engagement with the public for generating future opportunities is strong. For example, every year, around 200 million viewers in total watch OU-funded BBC television and radio programmes, with direct OU involvement in series such as Stargazing Live, Bang Goes the Theory, and Destination Titan for the Cassini- Huygens mission involvement. In addition, the OU is leading a consortium of UK universities in the FutureLearn project, a Massive Online Open Course (MOOC) platform majority-owned by the OU. Current FutureLearn developments include weather MOOC for the Earth and we propose to use the outcomes of UPWARDS for a novel (freely-available) Mars atmosphere MOOC.